Now don't sign me into the mental clinic yet, let me state my case.

I discovered this pairing by accident about seven years ago when I was perusing Harry Potter fanfiction and was vaguely intrigued but then abandoned it for other interests.  In 2011 I discovered some very impressive music videos, stories, and art containing this pairing which re-peaked my interest.  I was trying to figure out why I like this couple since, yes, the age difference does make most people uncomfortable and in a lot of ways it's a bit of a stretch to conjure a situation where they would accept let alone date one another.  One of the primary reasons I like this couple is that I'm honestly not fond of any of the canon couples.  Ron and Hermione are alright but I think they make much better friends/sex buddies than long-term partners.  I view Harry and Hermione in the light of a sibling relationship (which is better for them both in the long run since it means less complication and more love).  While we're on Harry, I have nothing against Ginny, I like her, but it feels like she and Harry were thrown together because Harry needed a love interest besides Cho and it helped satisfy Ginny's earlier crush on him.  Additionally, as Lilbun pointed out, their relationship is seeped in Freudian psychology since Ginny is in many respects Harry's attempt at filling the mother-void (she bears an uncanny resemblance to his perception of his mother both physically and mentally).

So after that brief tangent; I've always felt that Severus and Hermione got the short end of the stick.  Yes they both attain hero status and ultimately enable Harry to bring down Voldemort but their sacrifices are often taken for granted, Snape because he's difficult to get along with and Hermione because she's so nice and in control that people just assume she'll do everything.  Plus, both undergo horrendous torture and circumstances in the name of the greater good.  Harry's suffered a lot, I don't deny that, but in a lot of ways the fact that Severus and Hermione keep all the emotional torment from their experiences inside makes their suffering that much worse.  That's a big reason why I like the two of them together.  I feel they'd have a chance at understanding each other and maybe filling some of the hellish void forged by their negative experiences.  They're both extremely intelligent and talented magic-users with enormous wells of loyalty.  Yes Hermione is more openly affectionate than Snape ever showed himself to be but the fact that he had such strong feelings for Lily all those years illustrates his capacity to love.  And goodness knows the two of them are strong-willed when they want to be!

In conclusion, not that I have to prove to anyone why I like something but I feel that these two do have a certain thread of affinity to one another, even if it only leads to a tentative friendship.  I prefer an exploration of the characters of the two of them together rather than tons of explicit sex as well which is the tendency with an older man and a younger woman.  On top of all this I was very disappointed when Snape died, it wasn't a surprise really but I felt cheated in that he never had a chance to be completely recognized as a good-guy in his lifetime.  So I have no problem with the fact that people frequently ignore this cannon detail in fanfiction.  Please keep on writing all!  Let's give Snape and Hermione the recognition they deserve!

Chasing the Sun by Loten 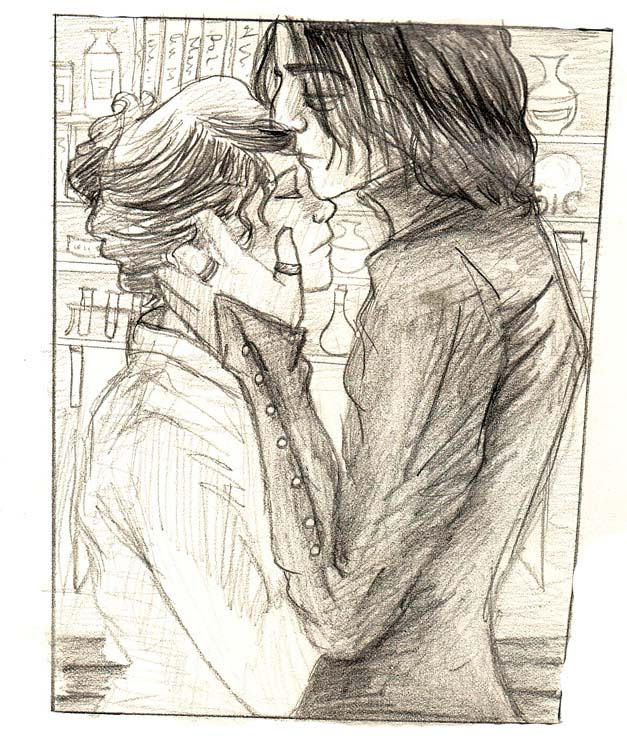 And a wonderful piece of art by comfortablylaura